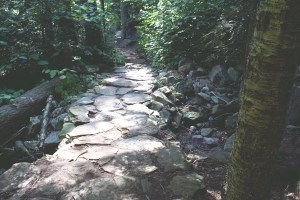 Reaching into her coat pocket this morning to extract her gloves, she thinks, for the first time, about the plastic sandwich bag she finds still there. It doesn’t matter which coat she wears. The plastic bag resides in one or another pocket of all. It remains in those pockets a full twenty-two months after its services are no longer needed.

For almost two years, she felt the bag in her pocket, and, though its presence undoubtedly registered, rather than extract the bag and place it in the garbage, she nestled it securely back into the pocket where it seemed to belong. This morning when she touches the bag, she pulls it from her pocket, and feels something akin to surprise. What is it still doing there? she wonders.

Before the kidney failure and resulting fight for her dog’s life, she read Joan Didion’s The Year of Magical Thinking, throughout which Didion examines her emotions and behavior after the sudden death of her husband in much the same way an entomologist might examine a newly discovered insect. Though sentiment surely lives and breathes beneath the surface, only the facts are displayed. Throughout the reading and long after, one image hovered off the page and returned to her periodically: that of the husband’s shoes. Looking at the plastic bag in her hand, the image returns to her now.

I could not give away the rest of his shoes.

I stood there for a moment, then realized why: he would need his shoes if he was to return.

The recognition of this thought by no means eradicated the thought.

I have still not tried to determine (say, by giving away the shoes) if the thought has lost its power.

Didion does not comment on her feelings about the fact that the shoes remain, nor about the reasons why they might. In this scientific exploration of emotionally generated behavior, the facts are the facts.

What was it that comforted Didion about those shoes? she wonders now. Was it really for comfort that she kept them?

Still gripping the plastic bag, she realizes, the primary reason it remains is no different than its original purpose—to clean up after her dog during their frequent walks. To this day, she is prepared.

Three years after the car accident that claimed her young niece’s life, she visited that niece’s parents. She slept that night in what had been her niece’s bedroom. The room had been cleaned, the bed made up for guests, but the arrangement, it seemed, remained just as their daughter had left it. A pair of jeans hung over the back of a chair. Pencils and notebooks lay scattered on the desk. By all appearances, their daughter could return at any moment and pick up where she left off.

Was it a shrine? she briefly questioned, but she thinks, just now, perhaps it was not. How would their daughter feel, her aunt and uncle may have wondered, to return to a rearranged room—clothes and projects not where she’d left them? Her parents were prepared for her return.

What matters is that you think they will return. You think someday, in some shape or form, they’ll migrate back to you—re-enter your physical orbit. You’ll recognize them when they do, you are sure, in whatever shape or form they’ve taken. You’ll embrace them then. So you wait. You are prepared.

As she places the plastic bag back into the pocket of her coat and walks out the door on her way to work, she wonders—

Did Joan Didion ever part with her husband’s shoes?

Hello to those who have stumbled across this page/blog/website–or whatever it turns out to be. I am a writer and a graphic designer fascinated by the artistic process, regardless of genre. Aldonza is an exploration of that process. Thank you for joining me to watch this space grow. I have no idea what it will become. Maybe, it will defy impulses to label…

When I asked him what he was thinking, he turned to face the ocean… Related